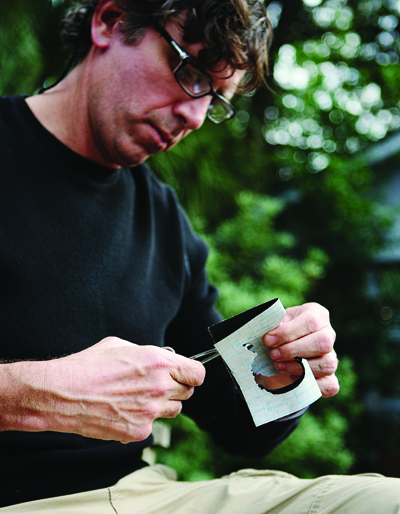 Clay Rice is described by author Pat Conroy as a “great talent who combines soul and passion.” Hand cut silhouettes and storytelling have been in his family for almost a century. His grandfather, Carew Rice, was described by Poet Carl Sandburg as “America’s Greatest Silhouettist” and traveled worldwide, sharing his mesmerizing cutouts with delighted customers.

Each profile silhouette takes Clay about 1 minute and he estimates that in his 40 year career, he has cut over ONE MILLION profile silhouettes. Clay’s nationwide following has families flocking to have this talented artist create keepsake silhouettes and to have him sign copies of his award-winning children’s book, The Lonely Shadow.

His work has been featured in Country Living, Washington Times, Atlanta Constitution, Cookie Magazine, Southern Living Magazine, and Garden and Gun and has appeared in the CBS series Army Wives. Clay is the recipient of numerous awards, including the Moonbeam Children’s Book Award, the IPPY Award, the Benjamin Franklin Award, and is a Kirkus prize nominee.

Clay’s landscape scenes and children’s illustrations are sought after by collectors worldwide and his work is on permanent display at the South Carolina State Museum.

Clay’s career as a professional silhouette artist began in 1982, after returning home from Nashville, TN, where he had been an aspiring songwriter. “I got tired of all the autograph seekers and had to get out of there,” he said in an interview, “plus I needed extra money to buy a new tire for my car.”

His grandfather’s presence in the Lowcountry was still very much evident through his art that hung in many households and museums, and Clay decided to take a summer job cutting silhouettes. “It was something I was always able to do, and I knew I had something to fall back on if the music career didn’t work out.” That fall he called on gift shops and boutiques, plying his trade throughout the region, and eventually the nation, and Clay became the top silhouette profile artist in the United States, with a whirlwind event schedule that currently encompasses over 200 events per year in 35 states.

Clay, like his grandfather Carew, believes that the true masters of hand cut silhouettes do not limit their work to profiles of people. As evidenced in his low country and landscape scenes, as well as his sublimely illustrated children’s books, that mastery is obvious. From the beginning of his professional career, he pushed the limits of his families art, with the notion that EVERYTHING has a silhouette. His cutouts became more and more elaborate as he developed his own style, all the while holding true to his grandfather’s pioneering work.

Carew Rice was hailed by Poet Carl Sandburg as “America’s Greatest Silhouettist.” Using sharp scissors and a keen eye, he created a bold style of silhouette cutting previously unseen within his medium. Although Carew’s subjects varied widely, his depictions of the deep South best defined his style. His hauntingly beautiful landscapes of Southern life and lands are sought after by collectors worldwide Through his refined technique and almost limitless range of subjects, Carew Rice claimed his place as America’s Modern Master of Silhouette Art.

Carew Rice began his career quite by accident, when he ventured into a dime store to buy a pair of scissors for general use for twenty-five cents. He went home and picked up a blank sheet of typing paper, and effortlessly cut out a silhouette of a blue jay and a squirrel. Instantly he knew he had found what he had been searching for, a fast and economical way to express his ideas in art.

The year was 1930, and the Great Depression had just begun. A judge hired him to cut out a silhouette of him and his wife. It was his first paid commission. From then on, he took to the road, cutting profiles at church bazaars, state fairs and boardwalk art shows, anywhere he could find people who were interested in his work.

What set him apart from other silhouette portrait artists of his time were his landscape scenes. No other artists seemed interested in taking the art to new heights, but focused on the business of peoples profiles.

Although a prolific silhouette artist in his own right, the main focus of Carew Rice’s work was his beloved Low Country of South Carolina. His work has a quality about it that has been described as looking into a dream. The tediousness of small details, the master’s knowledge of what to leave in, and what to take away from the paper, elevated him to the top of his profession.

At the time of his death in 1971, he had cut out more collectible landscape scenes than anyone in the roughly 200-year history of the art. His work is a prized addition for art collectors worldwide, and has adorned the collections of museums throughout the United States and abroad.